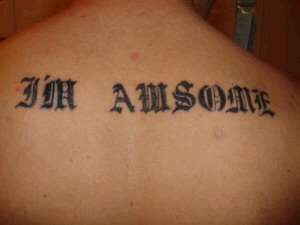 Say Ta-Ta to Tattoo Tuesday.    Spend $200 for 2 inches of Tattoo Removal or get 20 units of Botox for $200. ($10 per unit after that-usually $14)
So Long, Farewell, Auf Wiedersehen, Adieu; it’s Time to Say Ta-Ta to Your Tattoo
Unlike Monday, Tuesday rarely inspires strong feelings; in fact, it’s the most boring day of the week.  So, to create some passion about it, we wanted to link it to something that would stir up emotions; and that’s why we chose tattoos.
After all, they’re frequently fraught with fervor, and can actually evoke furor if they’re vulgar or obscene.  Heck, even innocuous tattoos can be contentious if they’re loathed by their owners’ loved ones.  Moreover, millions of people despise and regret their own body art.

So, if you’re kicking yourself over a hideous tattoo, you can get excited, because our incredibly effective technique for removing it is light-years ahead of previous methods.  Using photodisruptive technology, we create microscopic explosions beneath the skin, which break up the ink into tiny particles that disappear as naturally as a bruise.  Now, on Ta-Ta Tattoo Two-for-Tuesdays, you can get a two-inch area of your tattoo removed for only $200!


That’s almost thrilling enough to make Tuesday the new Friday!
(VIP Clients only)- To become a VIP client text the word *BODY* to 91944. You will instantly recieve a text good for a FREE Laser Treatment and other secret gifts. Bring your phone in and show us your text message to redeem it
Posted by Body Beautiful Laser Medi-Spa at 11:51 PM